“We were looking for a way to be more innovative with technology in Kindergarten, making it more relevant at an earlier age.

I thought, what could we do?  How can we change things up?

And I came back to Beth and asked, ‘What do you think about this?’”
~Sarah Rolle, Director of Technology 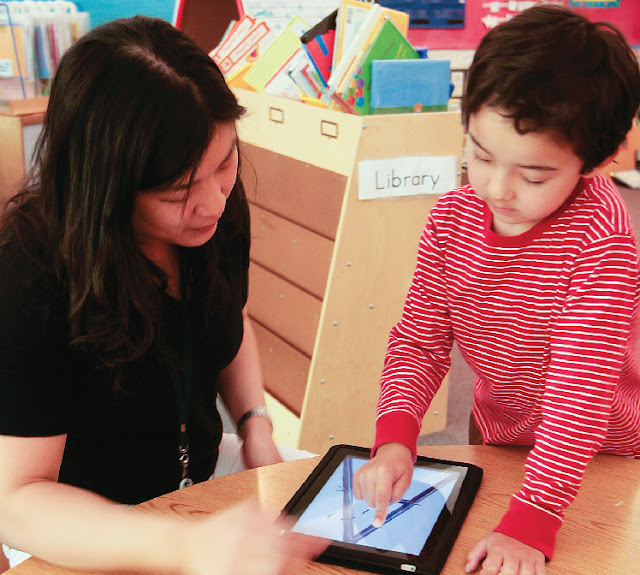 By Evan Brown
Director of Communications and Alumni

I am sitting in Dr. Lowry’s office in our weekly administrative meeting talking about the articles for the next Appletree publication.  In a lull, I utter the following suggestion: “What about a technology article, or a story about the iPads in Kindergarten?”
The intersection of school and technology is not new and certainly nothing new for The Elisabeth Morrow School.  We have computers in every classroom, in our libraries and four tech labs.  Our students use technology for everything from constructing avatars, interacting within virtual worlds, producing multimedia projects, and online collaboration to video conferencing with students, teachers and speakers from anywhere on earth.  Using technology in a meaningful way is a daily fact here.

I am standing in a Kindergarten classroom.  I have my camera, intent on collecting photos for publications.  I am looking for compositions and there is so much to see in this classroom: abstract paintings and murals, colorful manipulative materials, beaming smiles, children deep in thought or interacting with peers.  Visually, I see that the children are making Mother’s Day cards, but I am not fully gathering the nuance of the curricular objectives here; I am not seeing with “teacher eyes.”
One group of children is working on forming letters, carefully rendering their lines and curves in pencil to mimic the models presented.  Another group is drawing, cutting and pasting hearts and happy faces on folded, colored paper, embellishing their cards.  From time to time, a couple of students are called over to another table to work with letter formation on an iPad, tracing the lower case and capital letters with their finger.  All the while, teachers are moving among them, guiding, prompting, suggesting and pointing out when a job is well done and why that is important.  At first glance, there is nothing unusual here; we all made such cards when we were in Kindergarten.  I can remember, many years ago, cutting out the models from a Sears catalogue, gluing them to bright construction paper and scrawling a warm message to my mom: “You are the best MOM.” Some of the girls in my class would make the “O” in MOM a heart.

Wait! iPads were nowhere in sight when I was in Kindergarten.

You Have to Start Somewhere

In the early 1970’s, only a few Kindergarteners occasionally had the chance to peck away at the keys of a calculator, maybe adding a sum if they knew what addition was all about.  The rest of us were given two red blocks, told to find two more red blocks from a box, asked to put them together in a group, count them, and then realized that, surprise, two plus two equals four.  Maybe it is not too different these days.  Physical objects, like blocks and Cuisenaire rods, still work exceptionally well in teaching math concepts to young minds.

The difference is that teachers know that today’s young minds are born into a far more sophisticated age of personal technology.  Technology was not a major factor thirty-seven years ago, but today’s children need a very different skill set, a fact not lost on the faculty of Chilton House, home to Elisabeth Morrow’s Early Childhood Programs (ECP).
When new technology enters a school, it is usually a top-down delivery.  The more mature denizens are likely to get the latest tools.  This is why it was so surprising to find the School’s first iPads in the hands of Kindergarteners.  ECP Director Beth Anne Brennan explains: “We want to use iPad technology in a way that has an authentic impact on young children, empowering their own learning, sharing with peers so they feel important and responsible.”
Empowerment.  Cooperation.  Responsibility.  The Elisabeth Morrow School has always been very watchful and intentional when integrating technology within the curriculum.  For Elisabeth Morrow’s Director of Technology Sarah Rolle, bringing iPads into Kindergarten was about picking the best tool.  “Sometimes that involves technology and sometimes not.”  Ms. Brennan concurs, “We will always be grounded in child development here, but again, we need to ask how we can use technology in a way that is productive, engaging, meaningful, safe and fun, while protecting what Kindergarten is all about.
Introducing iPads to very young children made sense physically, since the devices are a perfect size for little hands.  As Kindergarten teacher Rachel Simonson notes, “There are no peripherals to manage.  For most of the children, using a mouse effectively is still a challenge.”  The iPad works by touch, by pressing, swiping or dragging on the screen, allowing for a level of independence.  For Ms. Brennan, one of the more significant assets of adding iPads to the Kindergarten curriculum is their mobility. “We know that little children don’t easily move from one activity to another. Changing activities and locations repeatedly can make focusing difficult. Children do better when activities can ebb and flow within the borders of their classroom, and having the technology right here in the classroom supports this conviction.”
Incorporating iPads into Kindergarten was not as easy as it might sound.  There was significant preparatory groundwork.  The Parents Association purchased the iPads in June 2010.  From there, the Technology Department “imaged” the devices, setting identical interfaces, protocols and apps on each device, which were then placed in the hands of the Kindergarten teachers. Throughout the summer, the iPads remained with the teachers.
Ms. Rolle explains, “I put on some apps for children as well as some for adults so the teachers would become comfortable with this new technology.  I experimented with a variety of apps, and if the teachers wanted to download more, that was great.  We held a training session in June, just to make sure they were comfortable when they left for the summer.  Once they were familiar with everything, we asked the teachers to look for apps that would be appropriate in their classrooms.”  From the beginning, teachers used a shared Google document to make notes about what apps were interesting, engaging or useful for specific activities.
A trial run in the classroom came in the summer before the 2010-2011 academic year, when the iPads were introduced to Kindergarten teacher Janet Cohen’s Summer Explorations class.  Adds Ms. Rolle, “I sat down with her and the campers to see how they would respond when told, ‘This week you’re studying animals, now draw something.’  We learned quickly that the children needed to play first.  Although they could comprehend a drawing program and use their finger to draw, they just wanted to explore on their own.”
In fact, as iPads arrived in the fall 2010, the teachers had to be mindful of their students’ enthusiasm.  “I was there with Michelle Goldstein on the first day,” says Ms. Rolle, “and it was the hardest thing.  She showed the iPad to everyone, and the teachers had to say what they always do, ‘you have to sit still, wait your turn and listen.’  The children rose to the occasion, showing us that they had the self control, despite the fact that there wasn’t enough time for everyone to get a turn that first time.”  Adds Ms. Goldstein, “They were all extremely excited. They all knew what an iPad was when they saw it. We needed them to understand how we were going to handle and use them. ‘This is how you hold it, this is how you turn it on, this is how you touch it.’  That was a concern for us.”
“We had them use the devices while sitting on the floor,” said Ms. Simonson, “to eliminate a drop.  Or we had them use it in a nook, where it’s not easily stepped on.”  Beyond establishing the rules, “We found that the ones who were more comfortable with the iPads were really good at guiding the children who were not.  While there can be a fear that technology is isolating, we have not found that to be the case.  They like to see what others are doing.” 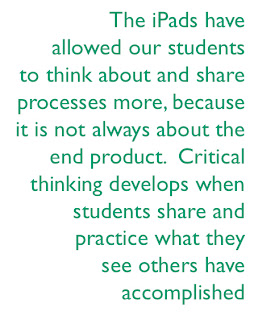 Teachers made another important discovery.  Says Kindergarten teacher Annie Hur, “It brought a new excitement to learning.  When we introduced iPads for handwriting, the children yelled, ‘iPads!’  Then, we would say, ‘Well, we’re only doing handwriting.’  Although we had been doing handwriting since the start of the year, the iPads infused the task with a new excitement.”
With this enthusiasm, the students started to share their experiences with each other and teach one another how they got certain results on the iPad. “That’s a big piece of our assessment,” adds Ms. Brennan. “The iPads have allowed our students to think about and share processes more, because it is not always about the end product.  Critical thinking develops when students share and practice what they see others have accomplished.  We are always going back to the process.”
“They do that informally right now,” says Ms. Simonson, “One child will ask, ‘How’d you do that?’ and the other replies, ‘Oh, I went into Cookie Doodle and this is where I found this, and that is how I did it.’ Which I think is terrific.”  Ms. Brennan explains that teachers already sit, listen and note what children are saying when they are working.  “This is where we assess their higher-level thinking and problem-solving skills.  When children have the chance to be the teacher, it really has an impact; they are empowered by their own learning, and when they share it with other children, they feel important and responsible.”

Sarah Rolle says to me, “I think that it’s your call how you focus your article. You can keep it centered on the iPad, but I think that technology has ramped up in certain ways because the Kindergarten teachers have been in the computer lab with the kids.”  She is right: there is more to it than just iPads, and herein lies the story, at least for The Elisabeth Morrow School, and maybe for schools in general.
Technologies, like the iPads and the interactive white boards recently installed in many classrooms, are injecting excitement into teaching and learning.  Having tools such as iPads in Kindergarten affirms our belief that technology has a place at all levels in our school.  It energizes students and teachers and revitalizes approaches to curriculum for students who live in a digital world.   The success of iPads in Kindergarten had led to the introduction of iPads into first- and second-grade classrooms and into the Special Learning Programs this fall.
Email ThisBlogThis!Share to TwitterShare to FacebookShare to Pinterest
Labels: Beth Brennan, Chilton House, Early Childhood, Handwriting, Language Arts, Technology
Newer Post Older Post Home 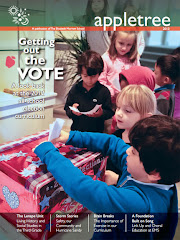